Almost forgotten today the originals . The song of a British duo – The Eurythmics most eligible song of mix even today getting mingled . The song remains still content and originally perfect after millions of fusions of this sound and lyrics as if all combiners are leveled at primary school on face . Though the best attempt goes to Marylin Manson . Just in my opinion maybe . 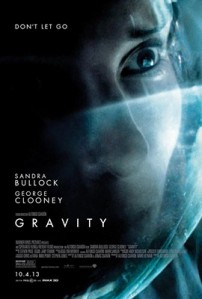 This is the first time I’ve seen a space drama sci- fi movie and i am really glad i did . What could be better than seeing it in 3D . The visuals are really good .The literal astonishments created in the movie scenes are successful and enough to make you mistaken that you actually just lost yourself in space .

There is being carried out the final sidewalk of Mission Control of service on Hubble Space Telescope when the team is warned of debris created by a Russian missile strike on a defunct satellite which has caused a chain reaction of destruction and that they must abort the mission. In an instant communication with the ground crew is lost .

Matt Kowalski (George Clooney ) and Dr. Ryan Stone (Sandra Bullock) are the fortunate sole survivors of Mission Control in Houston. Kowalski tethers up Ryan but the two are destined to make their own ways when Ryan’s leg gets entangled in Soyuz’s parachute chords . Kowalski detaches the tether so that Stone might survive  and floats away. Dr. Ryan Stone is skillfully firm in her decision to make it home to The Mother Earth .  She does with some shady moments . She makes it through the debris that completes its orbit and threatens in every next 90 minutes . And she finally lands Earth in full Gravity , her steps shake and she awaits rescue with a hell of a story you must see for yourself . Go for it people !

I am highly exulted i picked those tickets yesterday just to pick them and thank god i picked these Gravity movie tickets .