It was 20th Feb 1967 when this great legend took birth in Aberteen Washington . He took the very fabled American rock band Nirvana to worldwide success with his mythical vocal skills . Seattle came to be known as the home of these legendary performers . Kurt along with drummer Dave Grohl and bassist Krist Novoselic constituted the former band when Kurt came up with the band name while he was watching a tv show on Buddhism . The band launched the first album “Bleach” in 1989 . The first single ‘Love Buzz’ although failed to make a significant lift for the band’s emergence , it clearly mentioned Cobain’s skills as a songwriter . 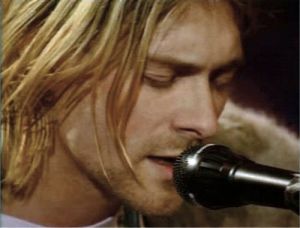 All this while ,the struggle for some of the band’s ambitions, in 1990 Cobain met his match in an edgy rocker named Courtney Love. The two met at a show at the Portland, Oregon nightclub Satyricon.

In 1991 , they released ‘Nevermind’, which spearheaded a music revolution. With the raw edges of punk and the blistering guitars of metal, their sound was labeled “grunge” for its murky and rough qualities. The single on the album ‘Smells Like Teen Spirit’ proved to be the band’s greatest single and took the album  to the top of the charts .

While with the increasing success Kurt began to worry about how his music was interpreted by his audience . The difficulty in alleviating the uncontrollable future of the band made him go for an escape which provided heroin . The drug provided an escape as well as some relief for his chronic stomach problems.

In February 1992, the couple  got married and welcomed their daughter Frances Bean Cobain in August of that year. Both Cobain and Love were into drugs and often used together. They found themselves being investigated by social services after Love told Vanity Fair that she had taken heroin while pregnant. After a costly legal battle, Cobain and Love were able keep custody of their daughter.

While the latter’s personal life was seen to be in turmoil , he was leading towards success professionally . But his relationship with Love continued to be more strained . Later in March 1994 , in his hotel room in Rome, Italy, he attempted suicide by taking an overdose of drugs. Love woke up and discovered that Cobain was in trouble. He was rushed to the hospital in a coma. While official reports said that it was accidentally overdose, Cobain had clearly meant to kill himself, having left a suicide note.

Returning to the United States, Cobain became a hermit, spending much of his time alone and high. Love called the police to report that Cobain was suicidal when he had locked himself  in his closet with some guns and medication. Love had an intervention for Cobain to convince him to get off the drugs in a family reunion . Cobain disapproved of the intervention and went off in rage . But Cobain eventually checked into a chemical dependency clinic in Los Angeles, but left after only a few days.

On 5 April 1994, in the guest house behind his Seattle home, Cobain committed suicide. He placed a shotgun into his mouth and fired, killing himself instantly. He left a lengthy suicide note in which he addressed his many fans as well as his wife and young daughter. Despite the official ruling of his death as a suicide, some have wondered whether it was murder and whether Love had been involved in his death. 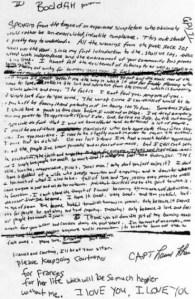 But still this great legend still inspires the hell out of his fans and he is mystical to me . People couldn’t understand how complex he was as an artist and i think it stood the best among his personality traits . The society wasn’t worth his innate mythical thoughts he tried to preserve . We miss you Kurt . I wish you were still with us making fantastic records . But i still think it was wise of you to say

” Its better to burn out than to fade away ”

One thought on “Kurt Cobain – The undone legend”

The Truth You Always Knew
justlatsblog

4 out of 5 dentists recommend this WordPress.com site

Music In The Key Of See

RU Creative Blogging FA13
this is... The Neighborhood

the Story within the Story

Life Through the Big Screen

A podcast where I invite guests from all walks of life to discuss their favorite movies, and we use that film as a starting point to talk about deeper issues such as faith, politics, and social issues.

This world's wild at heart and weird on top.

Editor at Longreads. Automattician since 2012. Californian since 1979. Junglist for life.